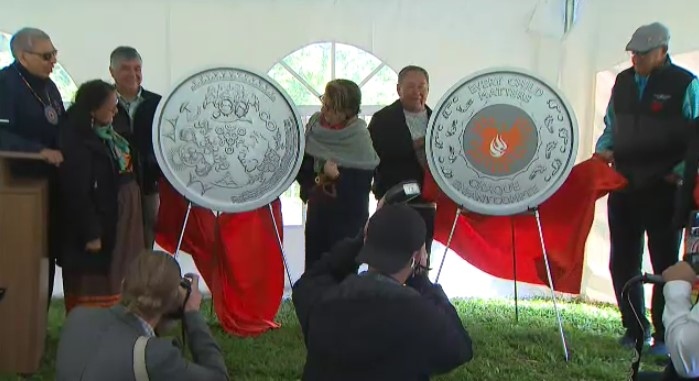 The Royal Canadian Mint, in partnership with the National Center for Truth and Reconciliation, unveiled a new keepsake on Thursday that represents the truth behind the residential school experience.

Both sides of the remembrance include images that reflect First Nations, Inuit and Métis teachings and art forms. The design is a collaboration between artists Leticia Spence, Jason Sikoak, and JD Hawk, along with survivors.

To symbolize First Nations culture, one side of the keepsake features an image of the sun, traditional tepee dwellings, a tikanagan, which is a cradle, held by two people, a willowherb flower, and a triangular pattern inspired by designs from rawhide carrying Bags.

To represent the Inuit perspective, this side of the remembrance includes images of traditional tattoos, the Northern Lights, a brother and sister, and an ulu, which is a traditional curved knife.

The Métis Nation is also represented on this side of the keepsake with images of a Métis sash, beaded flower, bison, and infinity symbol.

The other side of the keepsake features the words “Every Child Matters”, inscribed in both English and French. It also features images of orange-colored footprints and handprints forming the shape of the sun. Inside the hands is a flame pattern of the National Center for Truth and Reconciliation logo. The needles are surrounded by a border which represents the waves of light and heat from the sun.

By wearing these keepsakes, Canadians can show they support the survivors and remember the children who never came home. It also symbolizes a person’s commitment to learning the truth and performing acts of reconciliation.