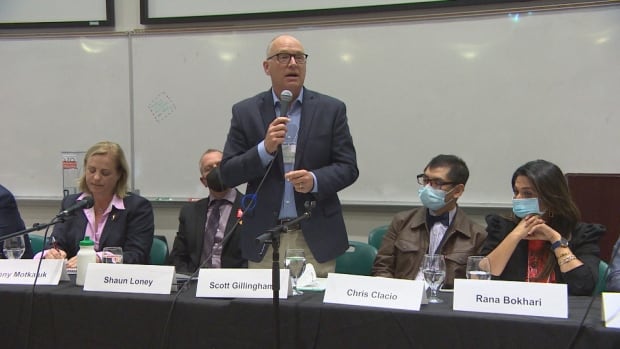 Improving Winnipeg’s tree canopy and improving public transit service were among the ideas put forward at a mayoral candidates forum on the environment Monday night.

Organizers asked each of the nominees how they would help the city achieve its goals set out in the Community Energy Investment Roadmap, which sets a goal of reaching net zero carbon emissions by 2050.

Scott Gillingham, who currently sits as a councilor for St. James, said one way to do that would be to convert the city’s housing department – ​​which manages the city’s property portfolio – into a “green properties and green energy agency” with a focus on renovating properties in the city.

“The City of Winnipeg has an extensive portfolio of buildings in our city, and some of them were built a long, long time ago. They are not energy efficient…we can do better,” he said.

“The perfect climate change fighter is a tree,” said Glen Murray, who has proposed making trees basic infrastructure as part of a “natural capital budget.”

“In one report, for every dollar we spend pouring concrete and paving things…we should be investing in the natural capital budget. And the first thing would be trees.

Another frequent topic at the forum was public transit and active transportation to reduce the number of cars on the road.

“The only way to get people out of their cars is with frequent bus service,” said Rick Shone, adding that he wants the city to increase the number of buses on the road.

Candidates were asked what they would do to implement a city-wide composting program.

Gillingham said a neighborhood composting program was recently completed, but he would wait to hear what the analysis showed about the costs and timelines for implementing such a program before committing to it. .

All but one of the 11 nominees attended the forum – Kevin Klein said he had a prior commitment, but released a statement providing his answers to questions from organizers.

The event was organized by 26 different environmental groups and hosted by broadcaster Richard Cloutier.

While the forum was focused on the environment, the event quickly went off topic when candidate Jenny Motkaluk celebrated the federal government’s end to masks on planes.

She received boos from the audience during her opening speech when she said she was done taking precautions to prevent the spread of COVID-19.

“Quite frankly, I’m done wearing masks. I’m done with social distancing. It’s time for us to recover. And I’m really looking forward to it,” she said,

The University of Manitoba has a mandatory mask policy, but Motkaluk was the only contestant at the forum who refused to wear one.

She left before the end of the event.

Towards the end of the event, in his closing remarks, Don Woodstock said he had received death threats for comments he made about Indigenous people.

At a forum on women’s issues last week, Woodstock said he believed Indigenous men were the cause of violence against women.

“I am one of the few candidates who, when you call my number, you speak to me. Despite the fact that I was threatened, threatened with death,” he said, his voice shaking.

“My wife doesn’t even know. But I didn’t want to tell you until tonight. For those who think I’m racist for simply pointing out the obvious.