From the outside, Jesse Tufts’s Edmonton home looks like a modernist paradise, with ample windows a glass verandah and charcoal and pine siding. But it’s not like every house on the block: the 900-square foot house, located in Edmonton’s Glenora neighbourhood, is net-zero energy, which means it consumes as much energy as it produces.

Tufts, a mechanical engineer, and his wife, Jena, a development engineering manager, purchased the two-bedroom, 1950s box bungalow in 2011 for $400,000. They liked the location—within biking distance to downtown Edmonton—and the big backyard. But after their first winter, they realized that the home’s post-war construction couldn’t keep the cold out; in Edmonton, temperatures regularly dip below -20 degrees Celsius. Blankets would freeze on the bed if they were pushed too close to a wall. Frost formed on the ceilings, and condensation froze into ice on the windows. Any time they stood next to a wall or a closed window, they could feel the draft. The couple replaced the windows, sealed baseboards with spray foam and added insulation to the basement’s bare concrete walls, but the house was still too cold whenever temperatures plummeted. 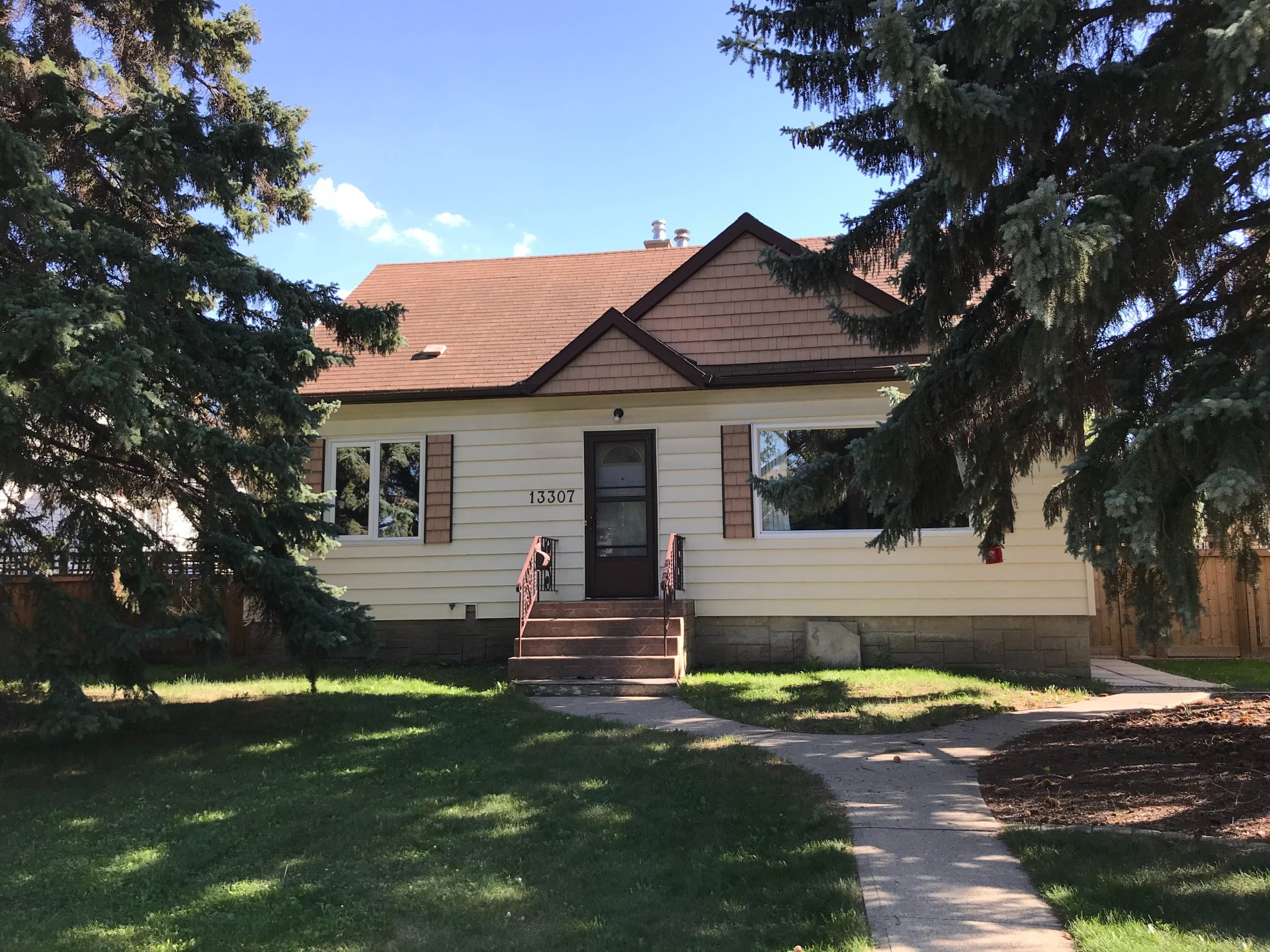 By 2016, the house needed more upgrades. The asphalt shingles on the roof had begun to peel, and things were getting cramped: Tufts’s sons, aged nine and four, were sharing a room. The couple planned to replace the original roof and add dormers—small rooms that jut out from the roof— to squeeze some extra square footage into the house. But when Tufts asked a carpenter friend for his opinion on the renovation, he was told that he might as well rip off the roof entirely and build a new second storey.

The two used software to play around with different configurations. They realized that with enough insulation, it would be possible to cut off natural gas entirely and heat the house only with electricity, turning the scrappy bungalow into an energy-efficient, solar-powered dream. Tufts was thrilled: as a self-described “gearhead,” he already had an interest in EV-powered cars, and he once converted a Japanese mini-truck to battery electric and learned how to home-brew biodiesel to run cars on vegetable oil. He decided to do it. 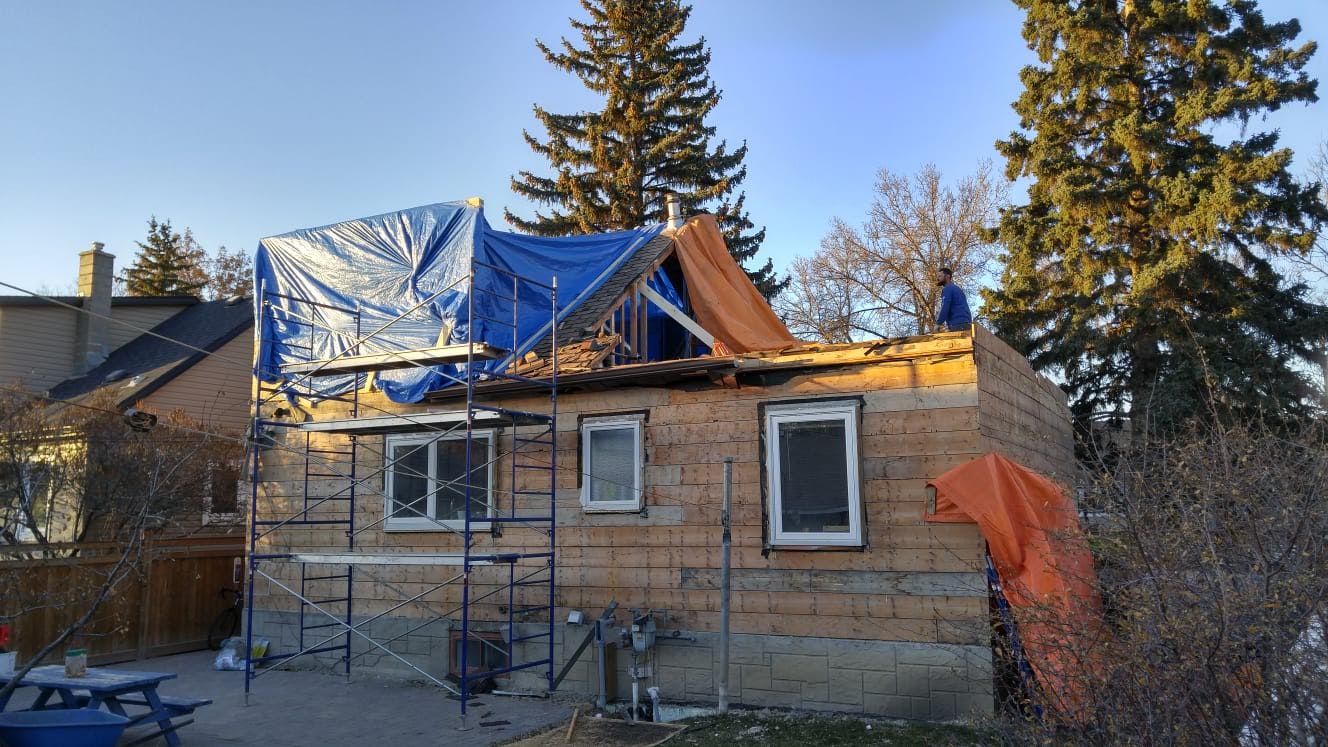 At the time, Tufts was working in R&D at a window and door manufacturer. He realized that every time a customer wanted a door with a window cutout, the company had to remove and throw away a piece of fibreglass foam insulation. He came up with the idea of gathering and upcycling the door cutouts to use as insulation for his own house. He added three layers of this insulation, bringing the energy load of the house so low that it could be heated with the power equivalent of four hair dryers on the coldest day of the year. 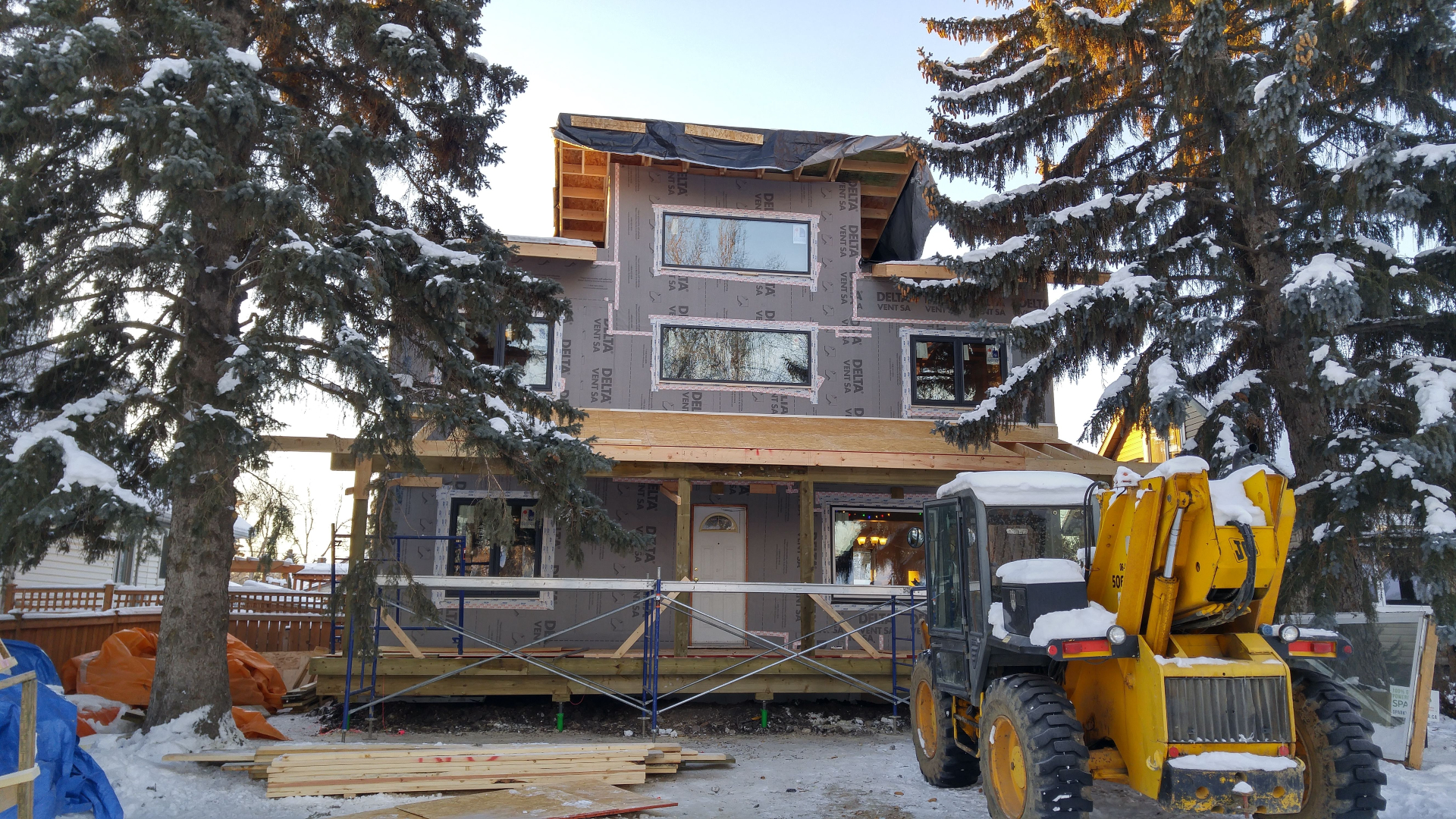 With a proposed budget of $100,000, he hired Butterwick Construction, which specializes in building net-zero homes, to begin rebuilding the second storey in August of 2018. The family camped out in the basement until construction was finished, even building a temporary wall blocking off the front door so builders could come and go without disrupting family life.

Once the structure was built, they wrapped the house in an exterior airtight barrier, which resembled a giant Gore-Tex jacket, to keep out the rain and wind. They sealed over the original walls on the main floor, and added new walls and windows that went the way up to the attic and right down to the foundation. 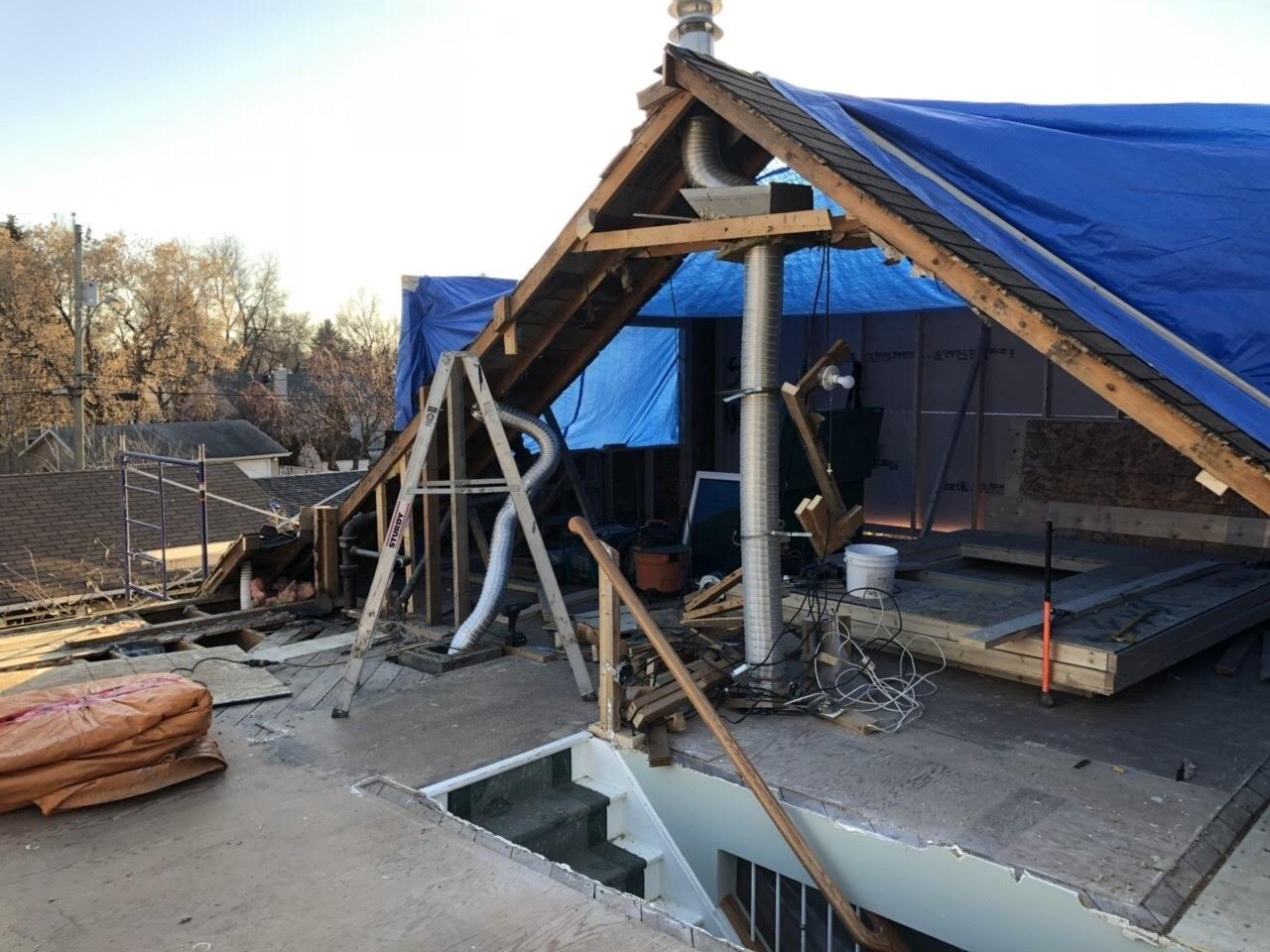 Tufts focused on longevity when it came to upgrades, spending $36,000 on durable Hardie fiber cement siding and installing a metal roof instead of a shingled one to avoid future repairs. The builders added a 12-kilowatt solar panel system onto the roof, which generates approximately 13,000 kilowatt hours of energy a year, outstripping the family’s usage of 10,000 kilowatt hours. “We’ve been net positive since we turned the system on,” Tufts says. In the winter, when there’s less sunlight, their energy bills can cost up to $300 a month, but they receive roughly the same amount in credits during the summer. After adding up the credits he received over the course of a year, Tufts realized that the power company actually paid him $500. The house is heated by a $12,000 air-source heat pump that extracts heat from the outdoor air, even in the winter when there’s less heat. 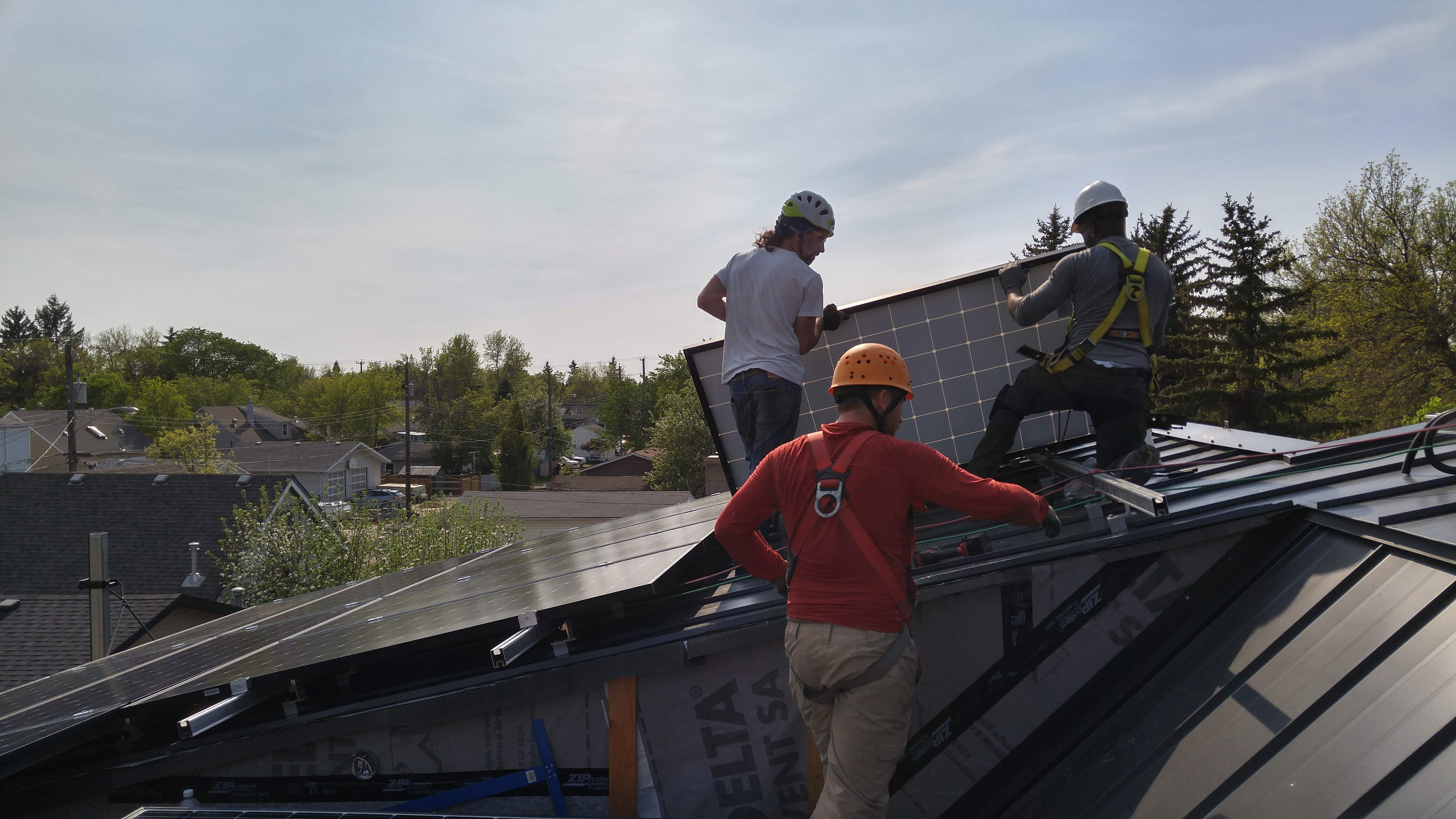 Even though the cost of the finished project stretched upward of $350,000, Tufts estimates that only $50,000 was directly related to the efficiency upgrades. The extra insulation and solar panels they added to the house ended up costing far less than the siding and the metal roof. The family also took advantage of generous government rebates, getting $11,000 back from the Efficiency Alberta program on the $27,000 solar-panel installation, as well as $8,000 back from the Canada Greener Homes grant on the entire renovation. 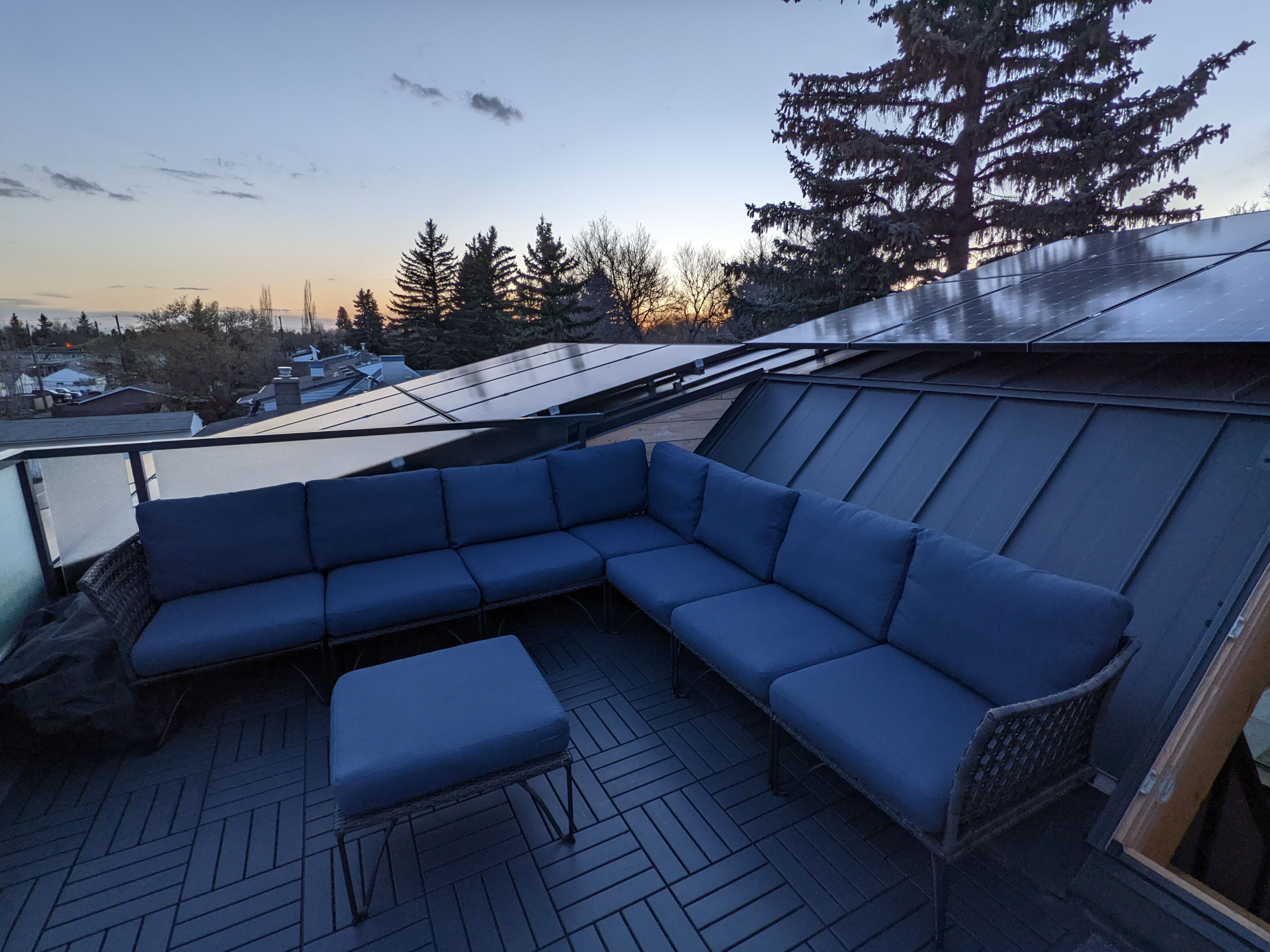 Now, post-retrofit, the family has much more space—1,850 square feet compared to 1,350 before the renovation, and four bedrooms instead of two. It’s also much more comfortable. “You don’t really notice a difference until you go to someone else’s house and you sit by a window and think, this is cold and drafty,” Tufts says. “Every square foot of our house is the same temperature.” The thick insulation has also created a sound barrier: traffic noise rarely makes it inside the house. 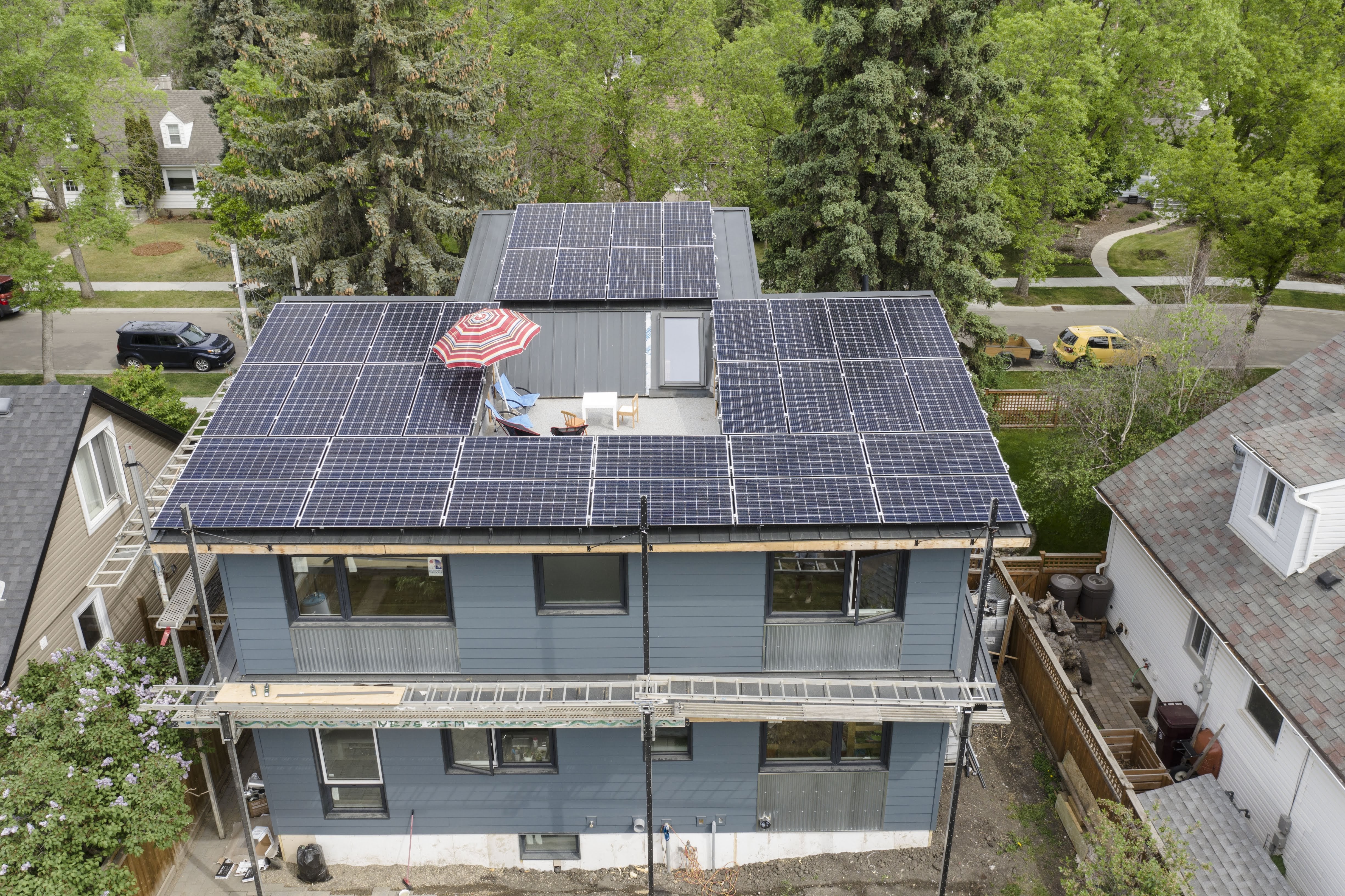 Perhaps the most surprising aspect of the net-zero retrofit, Tufts says, was how easy it was to accomplish. “Even though I’m an engineer and was already involved in efficiency work, I thought it would be difficult,” he says. Achieving net zero was a ladder of opportunity, he says. “Once you get to the next step, you realize all these things become possible.”