The pair gave up plenty of possessions to move into a modern 360-square-foot tiny home near Victoria.

Ashleigh Trahan and Elyse Wellhauser met on Hinge in December of 2020. At the time, Wellhauser was working in oncology research and lived with her cat, Neema, in a 1,500-square-foot Kitchener apartment. Trahan, an HR rep, owned a four-bedroom house in Kincardine, Ontario, which she’d previously shared with an ex. She was ready to downsize, but thanks to pandemic price surges, she knew she’d have to pay more for a rental condo than her current mortgage. She soon fell down a rabbit hole of tiny-home videos on YouTube. “It seemed like an interesting way to live,” Trahan says. She ran the idea past Wellhauser, whom she’d only been seeing for a few weeks. “I said, ‘That sounds like a great idea for you!’ ” Wellhauser recalls. Neither had any idea that, within nine months, they’d be cohabitating within 360 square feet.

Trahan got in touch with Heather and Kevin Fritz, the Alberta-based husband-and-wife design team behind Fritz Tiny Homes. The Fritzes’ own stint living in a converted city bus inspired them to launch their business, which specializes in luxury custom dwellings under 400 square feet—most of them on wheels. Trahan came with a $200,000 budget and a list of must-haves: space to ride her Peloton bike, ceilings high enough to clear her five-foot-ten frame, a workspace, and room for another person—one day. For inspiration, she gave the Fritzes photos of mid-century mansions and A-frame cabins, which she admits was entirely impractical. As the build progressed, Wellhauser began weighing in on Trahan’s design choices, and the home started to feel like theirs. Wellhauser decided to jump in. “We’re both 35,” she says, “and I thought Ashleigh was the one worth taking the chance on.” 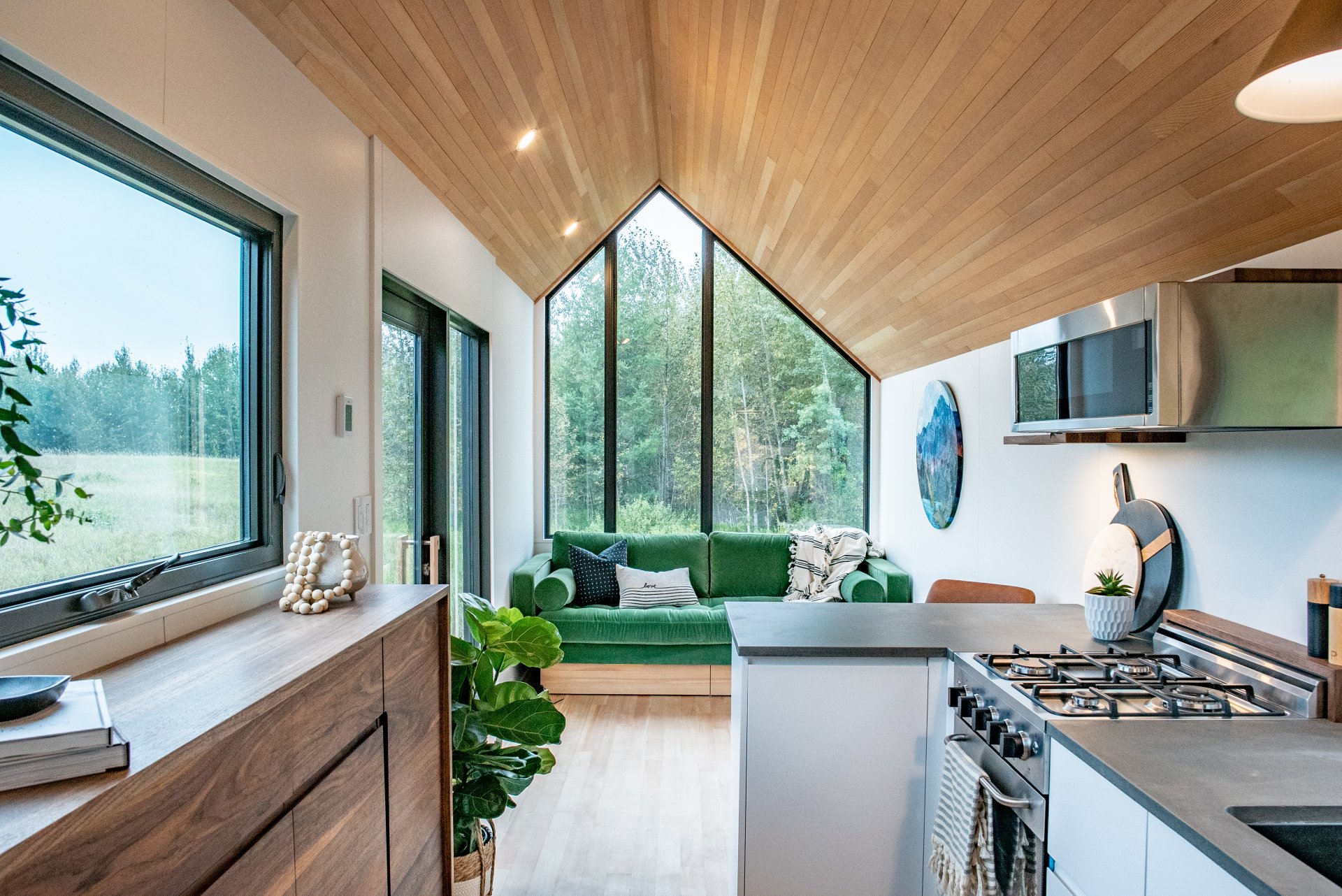 The first leg of the couple’s adventure was foiled by Ontario’s complex bylaws. Only a handful of municipalities allow tiny homes, and most RV parks aren’t zoned for them. Trahan and Wellhauser’s move-out dates were fast approaching, and they had nowhere to go. On a whim, Trahan put in an application at an RV-slash-tiny-home community near Victoria, B.C. They secured a spot for $700 a month and sold most of their belongings. Wellhauser had to find a new home for Neema. “It was like doing an archaeological dig of our lives,” says Trahan. “We were like, ‘How are we going to live without all this stuff?’ Now I don’t remember what we were worried about.” 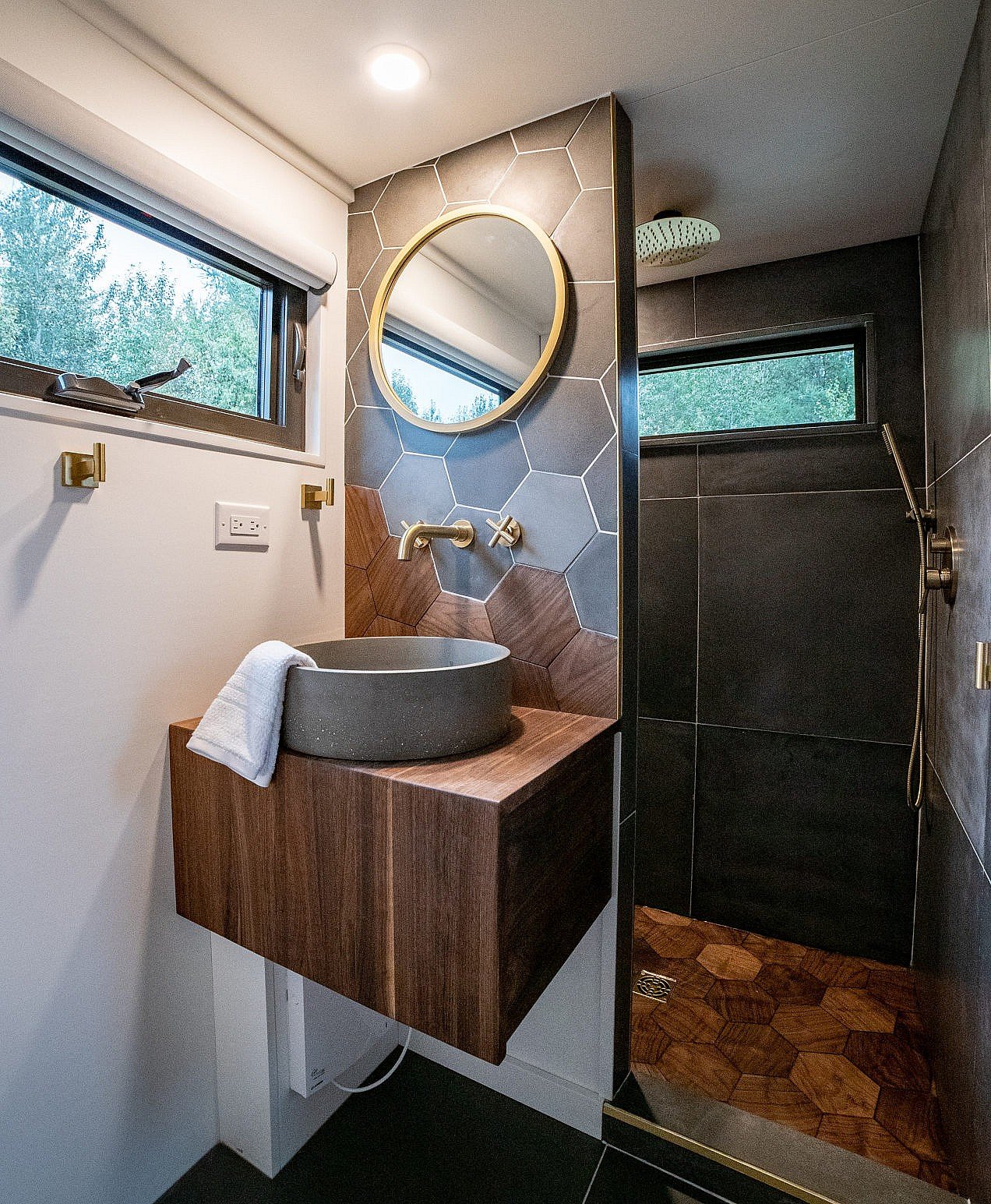 The bathroom maxes out at 34 square feet, enough to comfortably fit two people—“if one is showering,” Wellhauser says

By October of 2021, Wellhauser and Trahan were in the finished space, which came in just under budget. It’s a treasure chest of space-saving hacks. An Article sofa sits atop custom storage drawers that hold a table they unpack for dinner parties. (They can comfortably host four, but 15 people once crammed in for a housewarming.) Every riser in the narrow staircase hides a drawer where they keep kitchen gear. A walnut cabinet, which pulls out to reveal a mini coat closet, conceals the wheel well. And the ceiling in Trahan’s microgym is coffered to accommodate her full height when she’s standing on her Peloton. Douglas fir panels and giant angular windows channel the A-frame of Trahan’s dreams. 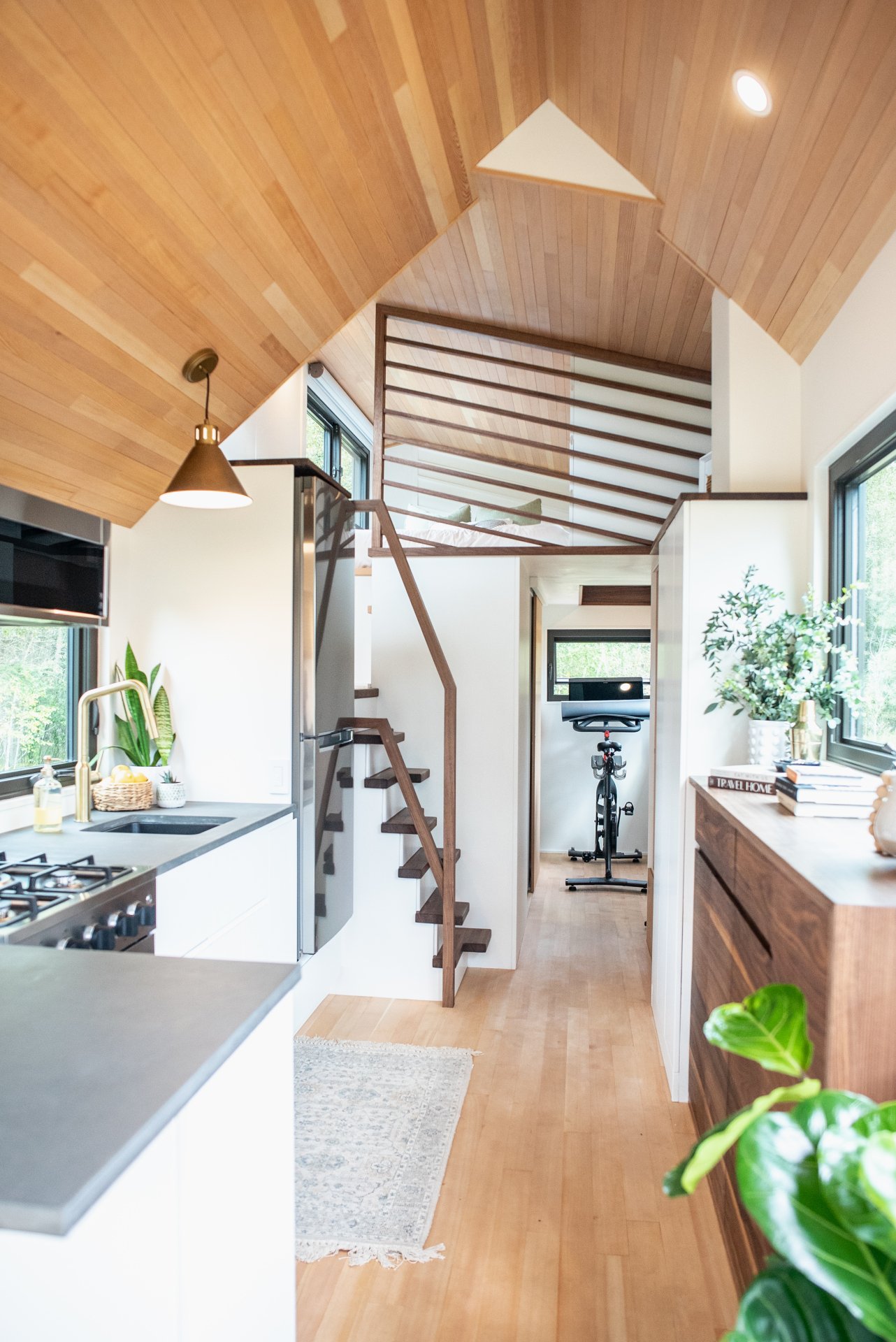 There are some annoyances to tiny-home life. A single 20-pound propane tank fuels the stove, warms the water and heats the floors. If the tank runs out on a chilly night, either Trahan or Wellhauser has to schlep outside to change it. There’s also very little privacy, a fact they quickly learned when they both attempted to work from home. After a brief sabbatical, Wellhauser returned to oncology and now commutes; Trahan works less than she did back in Ontario, in part because her workstation doubles as the dinner-prep area. But for all their space constraints, life for the couple feels more expansive than ever before.

MORE:  How a B.C. couple turned a shipping container into their dream home 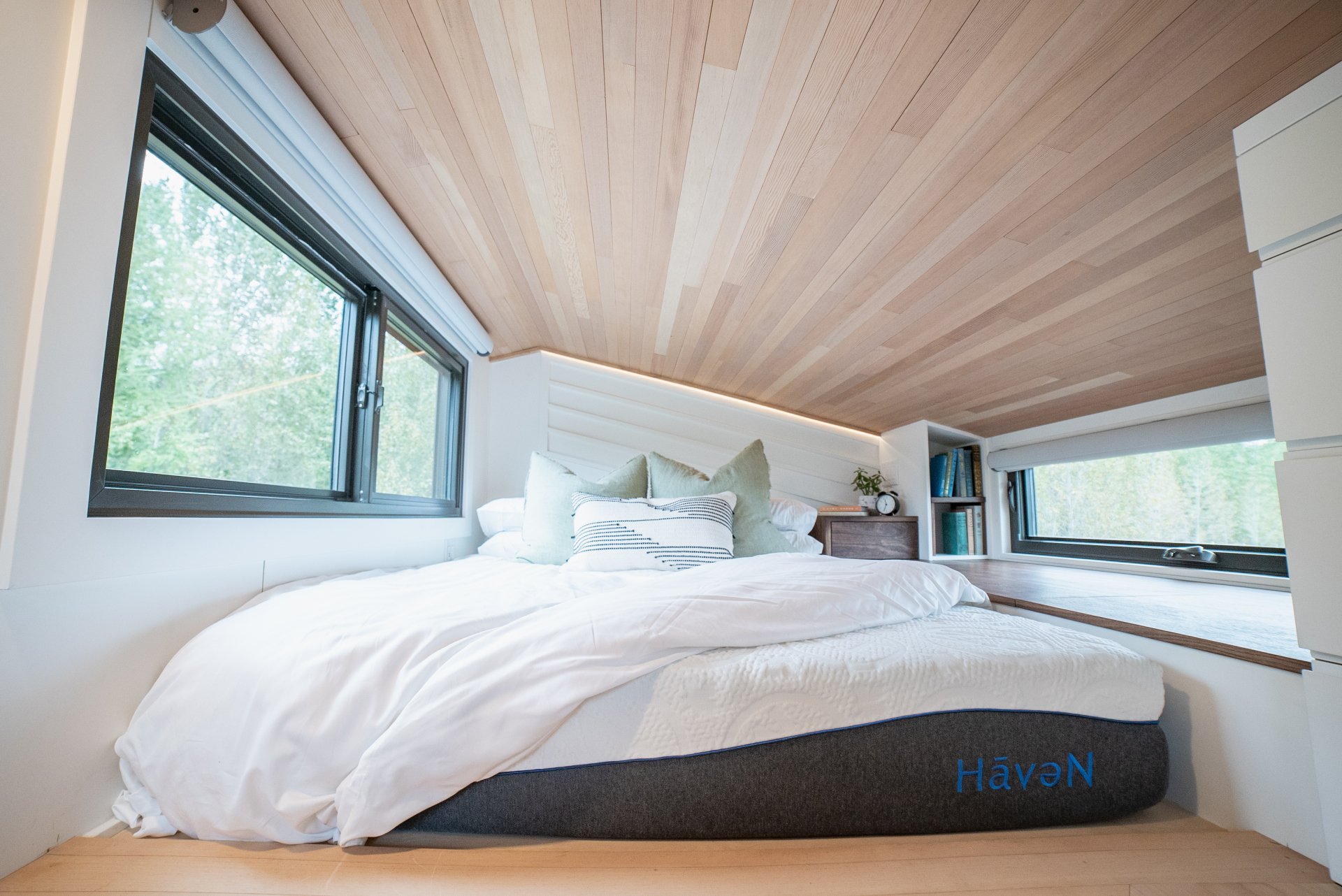 Trahan and Wellhauser’s bed is level with the loft’s windows, giving them an enviably cozy view of sunrises and stars 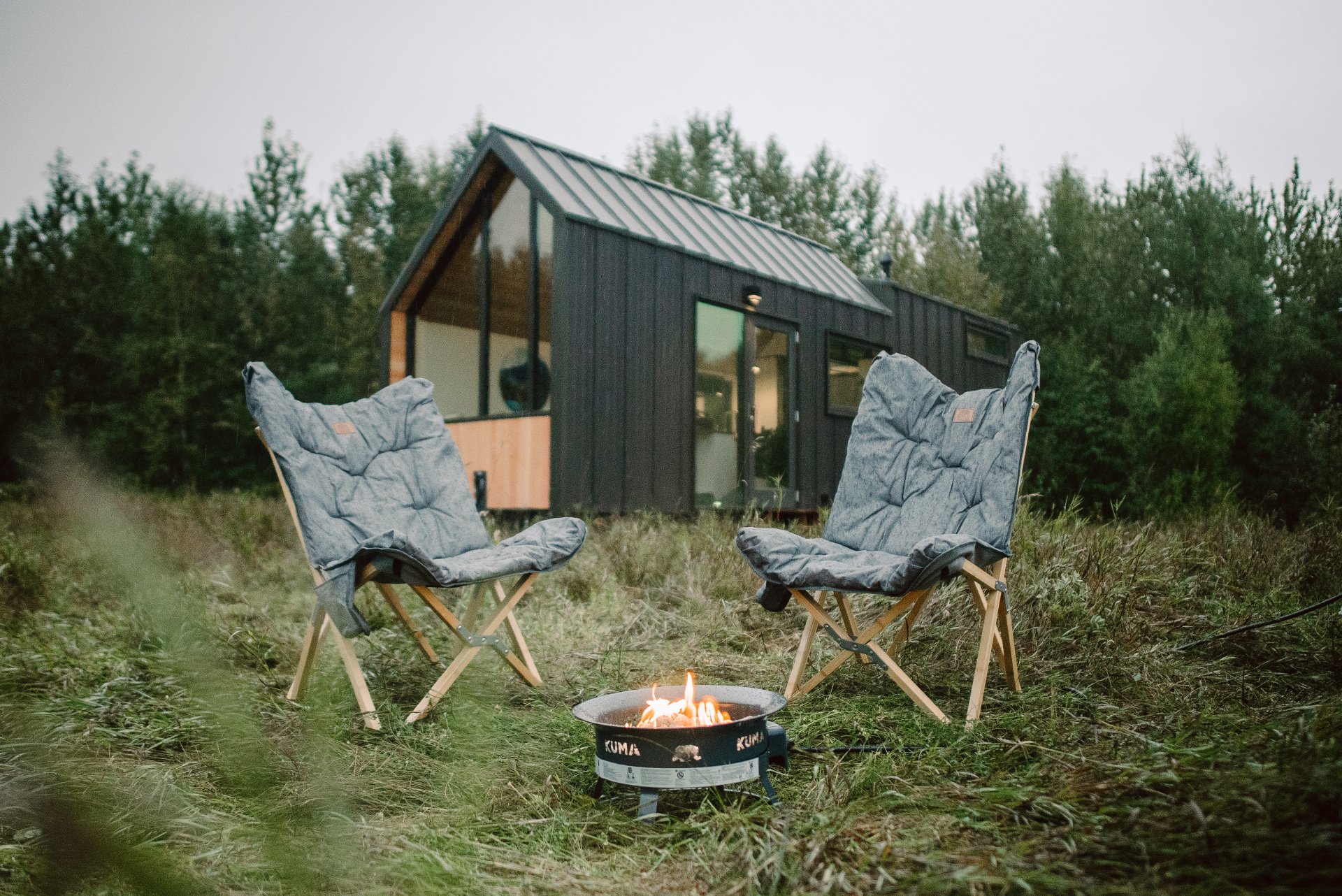 Encircled by cedar trees, Trahan and Wellhauser feel much more connected to nature

This article appears in print in the February 2023 issue of Maclean’s magazine. Buy the issue for $9.99 or better yet, subscribe to the monthly print magazine for just $39.99. 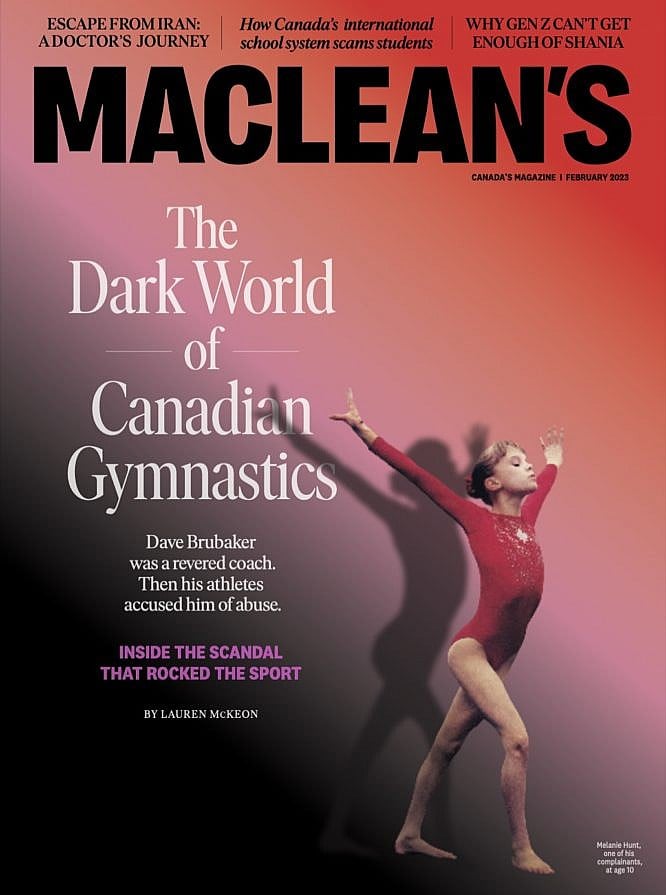