In AD 749, Emperor Leo IV of Byzantium was born. He led the Eastern Christian Church away from iconoclasm and towards a restoration of icons.

Sign up to receive daily headline news from the Calgary Herald, a division of Postmedia Network Inc.

The next issue of Calgary Herald Headline News will soon be in your inbox.

In 1533, England’s King Henry VIII secretly married his second wife, Anne Boleyn. She gave birth to Queen Elizabeth I but was later executed.

In 1579, the “Treaty of Utrecht” was signed, marking the beginning of the Dutch Republic.

In 1759, poet Robert Burns was born in Alloway, Scotland. Best known for his descriptions of country life and for satires against the religious and political hypocrisy of the day, Burns wrote much of his poetry in his broad Scots dialect. He lived a life of hard labour and poverty while struggling with his father on a series of poor farms. Burns nearly emigrated to Jamaica in 1786, the year his first volume of poetry was published to great acclaim. Later in his life, Burns helped support himself as a tax collector. He died in 1796.

In 1791, the British Parliament approved a bill splitting the old province of Quebec into Upper and Lower Canada. Upper Canada later became the province of Ontario, while Lower Canada became Quebec.

In 1907, American social reformer and author Julia Ward Howe, composer of The Battle Hymn of the Republic, became the first woman elected to the National Institute of Arts & Letters.

In 1915, Alexander Graham Bell inaugurated transcontinental telephone service in North America — more than 40 years after developing the invention in Brantford, Ont. The call was from New York to San Francisco.

In 1924, the first Winter Olympics began in Chamonix, France. (Previous to these Winter Games, hockey and figure skating competitions had been staged in conjunction with previous Summer Olympics.) These first Winter Games were at the time referred to as the eighth Olympic Games because seven previous editions of the Summer Games had occurred.

In 1932, the Trans-Canada telephone system was inaugurated as the Governor General, the Earl of Bessborough, spoke to the lieutenant governor of each of the nine provinces.

In 1953, the Empress of Canada, a luxury liner of the Canadian Pacific fleet, was destroyed in a dockside fire at Liverpool, England. The ship sailed between Canada and Britain for years and was used as a troop ship during the Second World War. 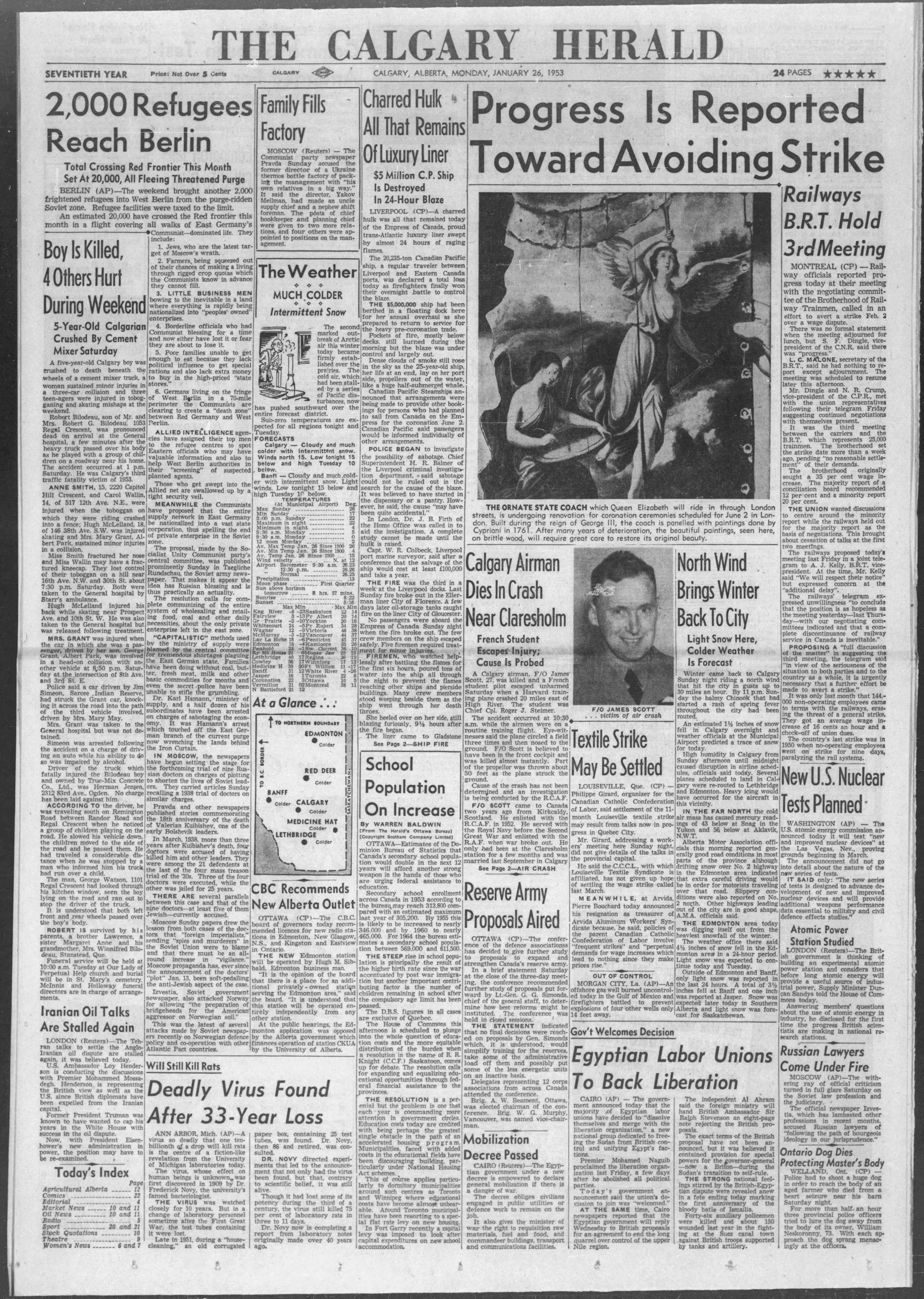 In 1955, the Soviet Union formally ended its state of war with Germany.

In 1959, Roman Catholic Pope John XXIII announced he would convene the Second Vatican Council, the first ecumenical council since 1870, in an effort to reunite the Christian churches separated from the Vatican. It officially opened in Oct. 11, 1962 and closed Dec. 8, 1965.

In 1959, American Airlines began jet flights between New York and Los Angeles on the Boeing 707. 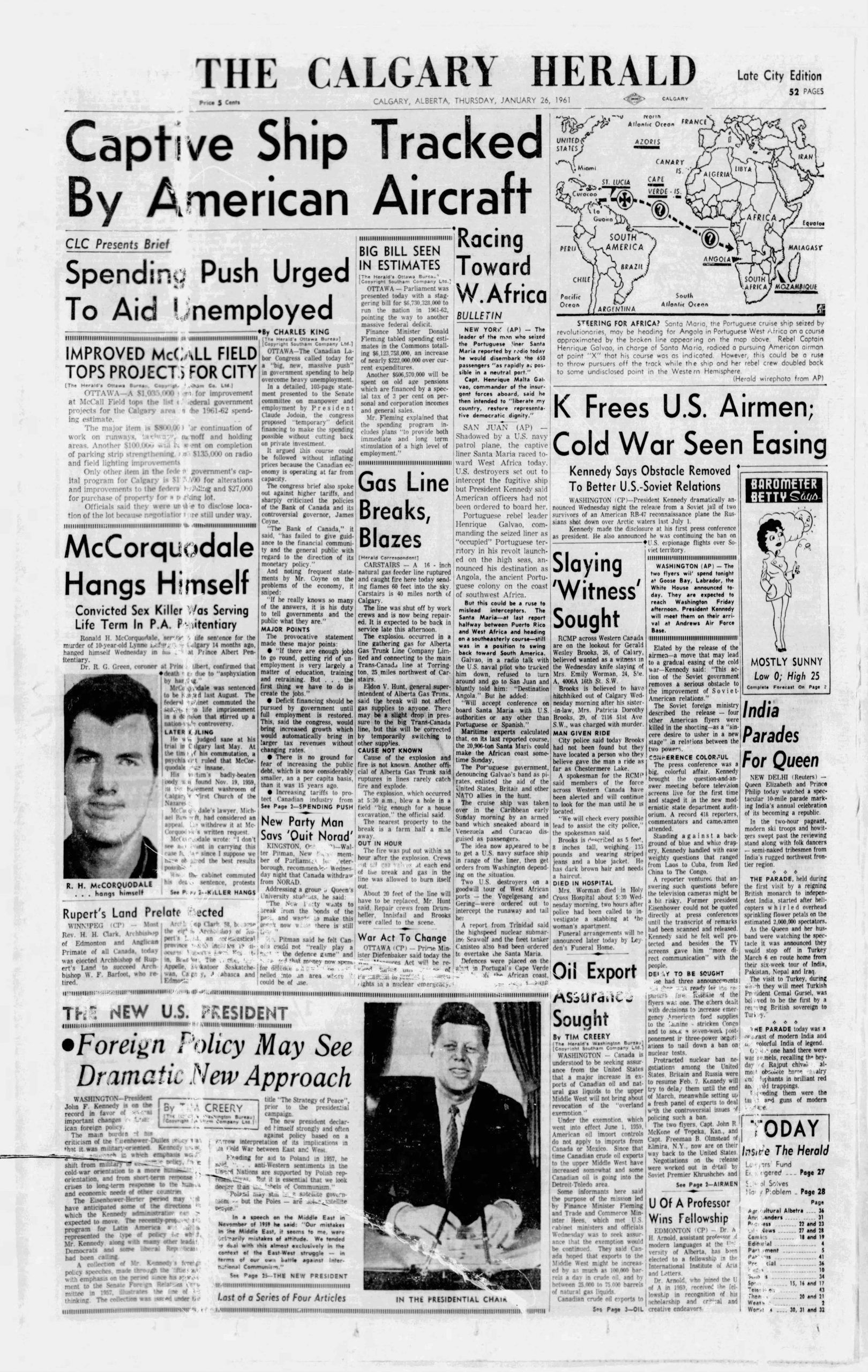 In 1969, Vietnam War peace talks resumed in Paris, with the inclusion of representatives from South Vietnam and the Viet Cong.

In 1971, Charles Manson and three young women were convicted in Los Angeles in the August 1969 slayings of actress Sharon Tate and six other people.

In 1977, in his first major international speech since becoming Quebec’s premier late the previous year, Rene Levesque told the Economic Club of New York that Quebec independence was inevitable.

In 1978, four women in Dubuque, Iowa — bucking mind-boggling odds — were dealt perfect bridge hands in the same game, allowing that spades is the true perfect hand.

In 1979, the report of the Task Force on Canadian Unity was released. It said Quebec should have the power to maintain its culture and language, and that federal powers should be reduced.

In 1983, Pope John Paul II signed a new Roman Catholic code of canon law. Among other things, it recognized new rights for women and barred clergy involvement in politics.

In 1990, Pakistani Prime Minister Benazir Bhutto gave birth to a baby girl. She was the first head of government to give birth while in office.

In 1996, an Alberta judge ordered the provincial government to pay $740,000 to a woman who had been sterilized by the province’s Eugenics Board in 1959. Leilani Muir had been wrongly diagnosed as mentally disabled and kept in a Red Deer home for 10 years.

In 1997, syndicated astrology writer Jeanne Dixon died at the age of 79. She shot to fame for her prediction that the man elected U.S. president in 1960 would be assassinated (John F. Kennedy was elected president in 1960 and assassinated in 1963). Dixon also acted as adviser to the rich and famous, including Ronald and Nancy Reagan in their years at the White House.

In 1999, Quebec Superior Court Justice Robert Flahiff was convicted of laundering $1.7 million in drug money when he was a lawyer. Flahiff was sentenced to three years in prison for the most serious conviction ever delivered against a higher court judge in Canada.

In 2004, NASA’s Opportunity rover zipped its first pictures of Mars, showing a surface smooth and dark red in some places, and strewn with fragmented slabs of light bedrock in others.

In 2006, Hamas won a huge majority in parliamentary elections as Palestinian voters rejected the longtime rule of the Fatah party. The radical Islamic group became the target of a crippling international aid boycott after refusing to accept demands that it recognize Israel’s right to exist.

In 2010, Canadian director James Cameron’s 3D blockbuster Avatar became the highest grossing film of all time, having taken in US$1.859 billion worldwide. It surpassed his 1997 epic Titanic. (Avatar went on to gross over US$2.7 billion in worldwide ticket sales.)

In 2012, Arizona congresswoman Gabrielle Giffords, who was shot in the head by a would-be assassin more than a year prior, formally resigned from the U.S. House of Representatives to focus on her recovery.

In 2013, by a slim majority, the Supreme Court of Canada ruled that Quebec does not have to give common-law spouses the same rights as married couples.

In 2014, the Anaheim Ducks beat the Los Angeles Kings 3-0 at Dodger Stadium in the NHL’s first warm-weather outdoor game.

In 2016, Toronto police officer James Forcillo was cleared of second-degree murder but found guilty of attempted murder for continuing to fire after dying teen Sammy Yatim had fallen to the floor of an empty streetcar in July 2013. The shooting was captured on cellphone videos and went viral online, sparking public outrage. In July, Forcillo was sentenced to six years in prison, but was granted bail pending an appeal of his conviction.

In 2017, TV’s beloved actress Mary Tyler Moore died at age 80. She gained fame in the 1960s as the frazzled wife Laura Petrie on The Dick Van Dyke Show. In the 1970s, she created one of TV’s first career-woman sitcom heroines in The Mary Tyler Moore Show.

In 2018, just months prior to the provincial election, Ontario PC Leader Patrick Brown stepped down amid allegations of sexual misconduct involving two women that dated back to when he was a federal MP. (Brown vehemently denied the allegations and even briefly re-entered the race to reclaim his old job. The PCs nominations committee later deemed him ineligible to run in the riding he was nominated in for the province’s June election.)

In 2018, Liberal MP Kent Hehr resigned from the federal cabinet after the sport and disabilities minister was accused of making inappropriate sexual remarks while he was an Alberta MLA a decade earlier.

In 2020, the co-creator of the beloved Canadian teen series Degrassi died at the age of 76. An obituary on the website of Cole Harbour Funeral Home and Crematorium in Nova Scotia said Christopher (Kit) Hood died suddenly at his home in West Lawrencetown. He and former teacher Linda Schuyler founded the Toronto-based production company Playing With Time in 1976, which produced the Canadian TV series The Kids of Degrassi Street, Degrassi Junior High and Degrassi High.

In 2020, Canada reported its first “presumptive” case of the novel coronavirus. Ontario’s associate medical officer of health, Dr. Barbara Yaffe, said a man in his 50s was in hospital in Toronto. Another official said the man had come home from Wuhan, China, where the virus outbreak originated. Ontario Health Minister Christine Elliot said she wanted to ensure all Ontarians that the system of detecting and treating the virus is working.

In 2021, the U.S. Supreme Court ended lawsuits over whether Donald Trump violated a clause in the Constitution and illegally profited off his presidency. The suits involved whether Trump broke the law by accepting payments from foreign and domestic officials who stay at the Trump International Hotel. The justices threw out Trump’s challenge to lower court rulings that had allowed lawsuits to go forward and ordered appeals courts in three states to dismiss the suits as moot now that he has left office.

In 2021, controversial Ontario Senator Lynn Beyak announced she is stepping down. The announcement came three years before her mandatory retirement, but in line with sticking to an eight-year term limit that would have been imposed on senators under the Harper government’s original plan to have an elected Senate. Beyak was suspended from the Senate after she claimed that residential schools benefited Indigenous children, although many suffered abuse and thousands died of disease and malnutrition.

In 2021, Brampton Centre MP Ramesh Sangha was ejected from the Liberal caucus. He’s alleged to have made unsubstantiated accusations against fellow Liberal MPs. Sangha had given a Punjabi-language interview in which he criticized Sikh Liberal M-P Navdeep Bains. He is said to have called Bains an “extremist” who supports the creation of an independent Sikh homeland, adding he was not fit to be a minister. Bains resigned from cabinet earlier in the month after declaring he did not intend to seek re-election.

In 2021, the mother of New Brunswick Premier Blaine Higgs died at 100. The news was made public on Twitter by the premier’s chief of staff. Bertha Higgs had just celebrated her 100th birthday New Year’s Eve at her home in Forest City, close to the border with Maine.